The artist known as Streetza Riais born Dermon Maurice Edwards from Chicago Illinois. His mother and father our both natives of the city of Chicago coming out of 79th and Walbash, and 57th and Damen. The two of them left the big city when his mother was 20 years old Nov 24, 1985 her 1st son was born. His Mother Terry Edwards born and raised native of the city of Chicago left with her son and started a new life in city of St. Louis Missouri 1985. He’s the oldest of 15 siblings from his mother; and 2 oldest from his dad’s side Calvin Dale Griffin out of 4 siblings. Growing up was rough for Streetza Ria, he’s been a father figure for his 15 siblings his whole life, and them surviving through the different trials and tribulations of living life in the ghetto inner cities of America. The name Streetza Ria, comes from his Streets being a representation of reality. The music he’s recorded is very detailed and descriptive as if the listener can place themselves in the record they’re listening too. His production ranges from several producers from all over the United States and overseas. The variety of production he provides allows the complete puzzle to fill a beautiful picture. His word usage and story lines are filled with substance varies stories that one can find strength and engorgement from through listening. Streetza Ria has 12 published albums available for purchase through the digital outlets that exist completing in over 140 singles. He’s started a indie label 1996 MDM Records. The artist has released 82 artists from the City of St. Louis from year 2017 to the current year 2018 through the different outlets digital music is sold globally. He’s created a fonta leaf cigar line, entitled RiA Wraps” which he’s used to brand himself as well as two clothing line “Money power respect clothing” and “Luxury Lifestyle Clothing” the artist has released multi videos that can be searched on youtube and other streaming services. He has music you can search on services such as pandora, spotify, I heart radio, and more. I introduce to the world Streetza Ria a family man, leader, musician, business man, and an all-around artist with music with substance with a story to tell. Breaking each barrier faced and climbing to top as one hell of a hustler. Artist and label owner out of the Midwest Dermon Streetza Ria Edwards.

Which famous musicians do you admire? Why?I admired and admire long list of greats with a great deal of respect. 2pac, Biggie, Ice Cube, 8Ball & MjG, Pimp C & Bun B, Snoop Dogg & Dre, Nas, Big L, too many too name!!
Were you influenced by old records & tapes? Which ones? I grew up and house that had both old records and tapes, and family that loved music. Those same old melodies from the old records; that’s what made me appreciate music. The saxophones, trumpets, them nice violins blended perfectly into a melody, mixing with that bass; Perfect formally. That’s the music i grew up on as a child all the way too a man; them oldies sampled over and over.
Who are your favorite musicians? Groups? CD’s? Favorite musicians; too many too name from different cities and states. Each category or genre has someone who excels in their craft at what they doing. Big shouts out the all the musicians doing they thing and holding they own; I’m my favorite musician right now; that Streetza Ria Rules of War is a must have go get the album now!
Groups? MJG & & 8Ball, NWA, Top Authority, Bone Thugs n harmony, Public Enemy, Fugees, Wu Tang Clan, CD’s? Streetza Ria Rules of War, All Eyes on Me, My Dairy by Scarface, Coming out Hard by 8ball & Mjg, Jay Z Reasonable doubt, Nas it was written, Dmx hell is hot” and many more!

What makes this kind of music “good” to you?detail, description, you know what’s real and the differ In reference too my album Rules of War; what make it great is the detail, the story telling aspects, the raw emotion can be felt regardless to who’s listening; the realness is felt at that point. Instantly good and great our separated. Streetza Ria Rules of War available on all digital outlets global.
Why did you choose to play this kind of music?
I consider my style unorthodox; and the kind of music that i release and have released within the past
Let’s Talk about your music and your last work
I have a new album released May 1st. Its called Rules of War, its 17 records all fire; I never would of guessed it only needed to be heard. I made an album filled with various production, Lyrical content, and substance.
How has your music evolved since you first began playing music?
My business is in order.
. Big Shouts out to @MTVRock for interviewing me! New album Streetza Ria Rules of War available all digital outlets global. Go get the album today! Stream now worldwide!! 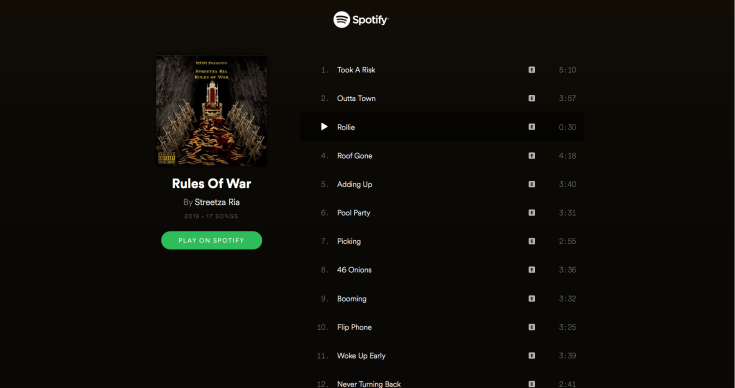