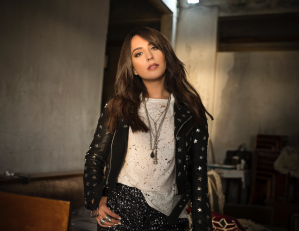 With her captivating multi-octave voice and persuasive cross-cultural message, vocalist and songwriter MAYSSA KARAA defines a new era of musical inclusion. Her songs tell of a journey connecting her origins in the ancient land of Lebanon to her adopted home of Los Angeles, California. She is about to launch her full-length English solo debut, SIMPLE CURE.

Growing up in Lebanon, MAYSSA was trained in classical music. While she loved singing, a future in engineering was her life plan. It was the sage advice of a French conductor that guided her to a professional music career.
“He told me, ‘When you meet God he’s going to tell you, ‘I gave you a gift–what did you do with it?’ That was the turning point in my career.

Cinema audiences might identify MAYSSA’s voice from the hit film American Hustle, where her Arabic version of the ‘60s classic “White Rabbit” was a standout track on the Grammy®-nominated soundtrack album.

The first song of her new Album “Broken Lines” was released on May 5 2018, and was selected to be part of the best selling Compilation Album of All Times “Now That’s what I call Music” on their 20th Anniversary along with Camila Cabello , Dua Lipa, Leona Lewis, Imagine Dragons (distributed by Universal Music Group).
…..
Mayssa Karaa’s musical message is about empowerment and overcoming adversity. An American citizen living in Los Angeles but born and raised in Beirut, Lebanon, Mayssa Karaa infuses middle eastern influences into modern global pop, melding an inspiring, unique, creative blend.