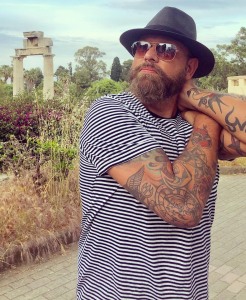 John Arthur Lewis is a Swedish Songwriter, Composer, Filmmaker and actor. He started playing drums and guitar at the age of 6. John grew up in Stockholm, Sweden and in Greece. He played in different bands and wrote songs thru his whole childhood.

John Arthur Lewis studied music in high school and at Skeppsholmens Folkhögskola, Musiklinjen in Stockholm. He kept writing songs and performed in theaters and on music stages in Sweden and in the US.

John Arthur Lewis moved to Los Angeles in 1994 to study music at Musicians Institute of Technology. After graduation he moved to the UK to write songs for, radio, commercials, bands, shows and theatre plays.

John Arthur Lewis has been involved in many music projects. He writes music for films, commercials, TV and radio. John Arthur Lewis is also a filmmaker and director and has made several short movies and commercials for Television and social media. He has also been working in the field of media & communications and has had positions as Head of Communications in several companies and organizations.

In april 2019 John Arthur Lewis composed the song “By Your Side” to help the organization Vid Din Sida.
VDS works and supports the elderly and homeless people in Stockholm.
All the money will go to the organization so that they can continue the important work to help and support our homeless and elderly citizens.

-When and why did you start playing?
John Arthur Lewis started playing drums and guitar at the age of 6. Since as long he remembers music has been a big part of his life. As a young kid, he turned pots and pans upside down and used cutlery to play drums on them. Then he started to play on his mothers old guitar and wrote his first song when he was 7 years old. His passion for music has always been there, his creativity and how music affects him deep inside. He has done many different things in his life, but music and film have always been the right things for him to work with.

-Which famous musicians do you admire? Why?
I have som many influences and styles of music that I like. But I’ve always liked Dire Straits, Van Morrison, Tom Waits, Miles Davies, Metallica, Warren Zevon.

-Were you influenced by old records & tapes? Which ones?
The first record I was really inspired by was a Beatles Album. I loved The Beatles even though they had stopped playing together since many years then. I was too young to have experienced them as a band.

-Let’s Talk about your music and your last work…
In April John Arthur Lewis composed the song “By Your Side” to help the organization Vid Din Sida. VDS works and supports the elderly and homeless people in Stockholm. All the money will go to the organization VDS so that they can continue the important work to help and support our homeless and elderly citizens.
In April and May 2019, John Arthur Lewis released three singles and June 1 the fourth single. His album “The Birth of JAL” includes 15 original tracks and is released June 6, 2019.

-How do you feel about the internet in the music business?
The Internet gives you as an artist the chance to have very direct and close contact with your listeners and fans. You get quick response and you have the opportunity to have instant feedback. It is also great to be able to distribute Albums digitally, Before it was a big job for the record company to physically plan a distribution of albums.

-What are the plans for the future?
The projects I’m working on right now is music for a major broadcasting network in the US. I’m also composing some music for dance clubs in Serbia. Later this summer I’m also writing music for Ethiopian National Television.