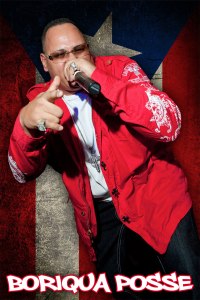 Anthony, a native son of the Bronx, took on music at a very early age. As a child, you could find him playing congas at family parties, expressing in small part, an ear for his future. This jovial hobby grew into an obsession with all things music and set him on a path that would help him overcome the adversities that surrounded him. Music would be his escape, his peace, his expression, his passion.
While always in pursuit of a career in music, Anthony honed many other skills. As a barber, a chef, a welder or tattoo artist, Anthony saw the opportunity to develop other resources that could find a place in his musical life. His ability to connect with people in any situation, as well as his ability to use humor to garner the attention of those around him found an outlet in 1990 when he formed the group Boriqua Posse. Leading up to this point, another very influential position was capitalized on by Mr. Quinones, a position in one of the nation’s largest resources for DJ’s, VIP Record Pool, under Mr. Al Pizzaro. During his tenure at VIP, Anthony learned of the inner workings of the music business from a seasoned professional who was always in tune with the pulse of the record industry. After being exposed to multiple genres of music, Anthony gravitated toward the music being played in the clubs. To further immerse himself into the scene, he danced in stage shows for various artists and rubbed elbows with the industry that he longed to become a part of. Through the collaborative efforts of a childhood friend, Raymond Perez, and a hugely popular club hit by Victor and Danny “WepaMan” Vargas, Boriqua Posse remixed “Yo Fellas” with huge success. With record topping sales and huge success the type of success that has shown Anthony taking the stage more that 6000 times! Insanely entertaining, high energy stage shows brought crowds to venues and the vocal talents of Boriqua Posse kept them coming back for more. The buzz surrounding this collaboration was deafening as it mixed different styles and genres of music in a way that few could rival.
More recently, Anthony was offered a record deal with Sony’s Tropical Music division but decided to take a direction more in line with his roots by signing with DGM, an independent label where he doubles duty as the director of A&R and Chief Communications officer Anthony is currently under contract with Big Daddy Entertainment where he has the opportunity to showcase his comedic side either by hosting or participating in comedy shows nationwide. He is also the company’s Entertainment Director
Today, as always, Anthony strives to provide his fans with unique, upbeat music and performances that are just beyond words. Though Anthony would also like to engage his desire to be an actor, his first love will always be his passion and feels blessed that he has had the opportunity to share his talents with the masses! Anthony (aka) Boriqua Posse is YONKERS 2018 Ambassador of music and also Director of talent and performances Anthony expressed that he is honored and privileged to receive such a high honor from the mayor of Yonkers New York Anthony lives by the motto…MUSIC IT’S NOT WHAT I DO IT’S WHO I AM……